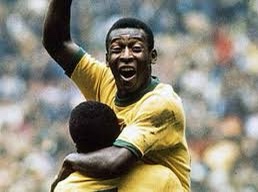 “A lot of people, when a guy scores a lot of goals, think, ‘He’s a great player’, because a goal is very important, but a great player is a player who can do everything on the field. He can do assists, encourage his colleagues, give them confidence to go forward. It is someone who, when a team does not do well, becomes one of the leaders.” – Pelé

Further to my post yesterday, what you do in the 75%, that is, the times in which you are not the team member who is in currently in possession of the literal or figurative ball, is much more than simply staying out of the way or not getting into trouble. The most noteworthy playmakers both on and off the field are those who make as many forward strides in the 75% as they do when they are carrying the ball forward themselves.

Having had the opportunity to attend one of Pelé’s soccer camps in my youth and having met him again subsequently in Boston a number of years later, I suppose I could claim to have brushed with soccer royalty, but in reality I don’t know much about Pelé’s character or philosophy on living. I do know, however, after having had the privilege of watching hours of games in which Pelé worked his magic in concert with some of the most remarkable soccer players of all time, that he possessed a rare talent and an uncommon vision for weaving personal brilliance into seamless and cohesive team play.

We often talk about “team players” in the business world, those employees whose individual talents are magnified by their ability to collaborate effectively with others, and I must admit that while my intent in my businesses is to build a team of “A” players, it can be challenging (but not impossible!) to find superstars who are not prima donnas. They are out there…I’ve met and have the privilege of working with a number of them!

The difference between a person playing at the top of his or her game and a prima donna is found in his or her ability to integrate meaningfully and unselfconsciously with others.